Abhi
A healthcare administrator by profession and an amateur writer/ photographer by passion. Am there at https://www.facebook.com/abhimanyu.bishnu

HOME IS WHERE THE HEART IS? 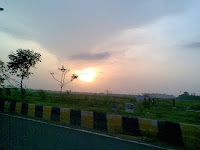 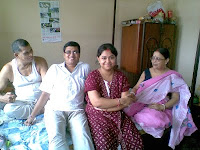 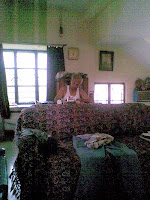 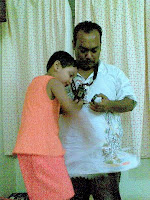 Wonder why it's so hard to come away from home. Was in Calcutta (Kolkata) last month, after 20 months. It was initially tough negotiating the humidity, the overcrowding and the congestion, but I got used to it, even to the smoke-spewing autorickshaws, after a couple of days. After all, home is home.

And home brings back memories-of growing up, of learning, of moving on. You enter an old alley in Tollygunge and you remember,” Hey! This is where we came during the all-night Durga Puja excursion so many years back.”. Impromptu comes a verse to the mind:

“I entered this alley, still and quiet;
It was yesterday once again.
I closed my eyes and listened to the sound
Of gently falling rain.
I could feel the years that had passed by,
The happiness, sorrow and pain;
As I stood there quietly listening to
The sound of falling rain.”

I see houses, streets I haven’t seen in ages, not even during my last few years of existence in Calcutta, and I discover them anew. Places remind me of people, of sweethearts, of incidents that are lodged in the corner of the mind like an old archive which is opened only once in a long, long time, only to be seen and closed away again. And then, I actually meet those people, and the memories come flooding.

Beyond the bandhs, strikes, rallies and the frustration of the people, I find that life still lives in glorious technicolor. People still talk as animatedly as they used to (Bengalis are an excitable lot!).The “mashi” (maid) in my house is still working there, after 10 long years. Talk of employee loyalty!

People work on their vocations regardless of all the disturbances around. Nano, Nandigram, Aila- it does not matter- life goes on. Makes me feel , for a second , whether one could think of coming back .And then the last few months of existence in Calcutta flashes back in my mind- the daily disturbances, bandhs, employee disturbances and the menacing shadow of the “party”, and it doesn’t take much longer for reality to sink in. I am more contented where I am now.

Speaking of the “party”, the commies are on the backfoot now, getting bashed up everywhere. When one hears of the once- all powerful local CPIM councillor being heckled, one knows that the time for change has come, after 32 long years, and the people are well and truly weary. It’s only a matter of time before they are overthrown.

You observe that society has moved on. Children don’t play as they used to- it’s more of computer games, tuitions and indoor existence now. Our carefree (relatively!) childhood seems almost utopian today. You see the change in the dressing style, the words, the way people behave , and you understand that it is inevitable. It is what “modernity”, as perceived by some, is all about.

My Dad was shocked when we went to one of those swanky malls and I bought him a Reebok for Rs.4000/-(in Delhi, I buy it for much less, courtesy factory outlets and the Sarojini Nagar market). Malls have come up all over the city, and even in these supposedly recessionary times, people are happily buying.

Even in these “modern” times, the city still hits me hard- the pile of uncleared garbage outside a swanky mall, and indeed everywhere on the streets, the broken footpaths, the rickety buses and the all-enveloping congestion and confusion. Ah, well, one notices that the roads have improved somewhat. It is better to expect small gains-dreams die hard here.

Oxford Bookstore proves to be a comfort, as always, and I have a cool refreshing drink and watch the rain and the people outside. And start composing another poem.

I talk to relatives; and I find they all have their share of problems- the recalcitrant daughter-in-law, the argusome son, the nonchalant husband and the pompous mother-in-law. Wonder how things went by with relatively less conflict when we were growing up. Or is it simply a perception of things?

And then comes the day for leaving. There is a certain heaviness in the mind . The pain of leaving home mixed with the relief of going back to another home, where I actually belong now.”Home “is actually a state of the mind. It doesn’t help to see Mom quiet and disappointed- wonder why it still affects her when I go back “home”. Parents will always be thus.

The journey to the airport is fast, since it is early in the morning. Leaving Behala, Park Circus, Rajarhat behind, we race towards the airport. It is one of those muggy Kolkata monsoon mornings.

I hug and say goodbye to Doel at the airport, since she will be staying on for some more time. And enter the terminal building, only to encounter the huge lines at the check-in. After a lengthy check-in, one finds a lack of place to sit, rickety bathrooms and nothing to eat. It is then that the comparison with the orderly and neat Delhi airport comes into the mind and irritation sets in. Really, what holds this city back from progress? It has everything it could ask for- except the state of mind to take it forward. But, of course, that doesn’t take away the fact that it is my city. Someday, things will improve. Someday..someday, I can only hope.

There are raindrops on the tarmac, as I take my seat inside the plane. I can see the now-abandoned Hotel Airport Ashok in the distance. A couple of buses are running across the periphery of the airport. Again, memories come back.. of catching those buses and coming to the airport all those years back, when Dad would come back from one of his official trips. The whole thing seemed so exciting then.

The sky is overcast, and I am really feeling gloomy now. All said and done, I still love my city, I decide. And I say goodbye:

“Everytime I leave this city behind,
There’s this bittersweet feeling,
And the journey of the mind
Of going home, where I belong,
Yet leaving a part of me here behind
Forever in this city.
I wonder but I cannot fathom
Why it’s so happy to go back home
But yet so hard to say to leave this place,
Yet so hard to say goodbye.

We hit the sky, and I can see small houses, buses, greenery, water bodies. And as we move on further, the Hoogly passes below us like a giant silver strip. We move on over kilometers of lush greenery, till we are well above the clouds.

Flights are all the same. Read a magazine, buy your breakfast and have it, visit the loo (there was an abnormal wait this time before the loo- I exchanged a knowing smile with the next person in the queue, sympathesising with the plight of the person inside.

And then I came back and put on my earphones to listen to some music. I was still feeling gloomy. The Robindrosangeet wafted out:
“ Jibono moroner shimana chharaye
Bondhu je amaar, royechho daraye”
(Beyond the boundary of life and death,
You keep standing, my friend)

It was quite apt. If one has listened to Robindrosangeet, especially one such as this, on an aircraft, he would have known true joy. We were floating among the clouds, and it really seemed as if one was in transition from Earth to Heaven and inching closer to Him. Did Tagore compose this on an aircraft?

The descent began. I could see acres of dry land, an apology of a river called Yamuna . The contrast with the lush greenery 2 hours back was too great. I felt like shutting my eyes.

We flew over Delhi; I could see the Tughlakabad Fort, the Qutb. Very soon we hit the tarmac of IGI. A long taxi to the main terminal- on the way, construction activity everywhere, a city in full-blooded business. A typical Delhite would have said” No time for Tagore-Shagore”. Back to Delhi , and the oppressive Delhi heat.

Journeys are made first in the mind. My journey was over, and I had reached back home, leaving behind memories, and longing.
Posted by Abhi at 7:25 AM