Abhi
A healthcare administrator by profession and an amateur writer/ photographer by passion. Am there at https://www.facebook.com/abhimanyu.bishnu 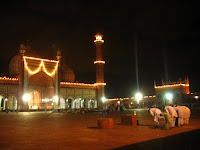 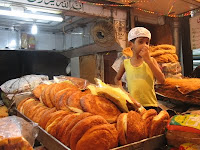 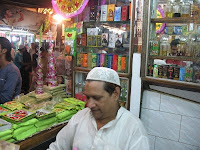 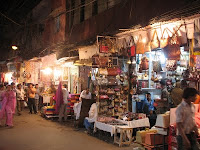 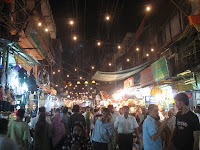 Ramzan is a festival to watch out for in Old Delhi. It is during this one month of fasting that the Old City comes alive in colours , celebrating faith . From Ballimaran to Matia Mahal to Jama Masjid, the streets are a riot of lights and colours. All kinds of food line the shops on both sides of the road, the air smells of semai, fried chicken and attar.

I started off from Urdu Bazar, in front of Jama Masjid. Heaps of chicken were stacked in the shops on the roadside, kebab were being roasted on skewers, heaps of semai were being sold. The Jama Masjid was lit up brightly. And the usually chaotic streets were even more chaotic, with people, rickshaws and cars fighting for the same space.

I took a street on the left and entered Matia Mahal. It houses the eatery, Karims, an institution by itself. But there are umpteen other hotels, some looking decent enough, others decidedly shabby. The entire street is lighted with bright lights and festoons. It is just after Iftaar and people are devouring like crazy. Kebab flies off faster than lightning.

I venture deep into the innards, past shops selling sherwanis, salwars and kurtas and restaurants selling all kinds of food. In front of some of the eateries, poor people lined up, squatting on their haunches, in anticipation of the feast to follow.

The names are interesting- Chitli Qabar, Bazar Tiraha, Sui Walan … The esoteric galis of the old city surround me , in all its festivity.

I walk far enough and then turn back towards Matia Mahal.On the way back, I buy Semia from a sweetshop. It is being sold by the quintals, in huge heaps, in shops all around.

I enter an Attar shop, try out the fragrances, buy one. It is the famed five flower fragrance, which I had last seen in Hyderabad. The shopkeeper generously rubs attar on my shirt-sleeves. Soon, I am smelling pretty, sp much so that the next customer smells my shirt . Queer!

I have excellent Shammi Kabab at a restaurant, follow it up with jalebis , and buy rusk biscuits , speciality of this area.

I finally venture into the huge Jama Masjid, now decked in lights. There is a large crowd outside and inside. I take photographs sitting in the huge corridor. The lights have added a special sheen to this age-old building. People loiter around inside;some are praying in groups.

On the way back to the car, I buy fried chicken and firni , and move on. I am loaded with goodies, and it has been one more successful trip to the old city.
Posted by Abhi at 10:43 AM

Such a beautifully written account...reminded me of the wonderful years of my childhood which I spent in the quaint old city. Were the best years of my life !

Very well written - sudden wave of nostalgia, and a craving for rusk biscuits.